"Monday the 21th of Januari 7 students in Drama at KASK; Ghent received an envelope containing a map from Ghent and a busticket. Their instructions: "Get lost in the city and ask the following to a stranger: would you like to make a short play with movement and present it at the 19th of March for the first and at the same time the last time to an audience?"

With and from Xavier, Evelyne Verhellen e.a., / Coaching Alain Platel 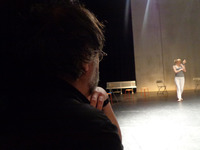